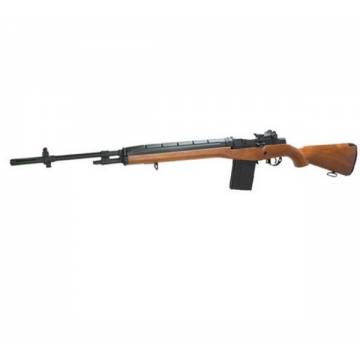 The M14 is the model that you've been waiting for. It has it all, looks, performance, reliability and compatibility. The look and feel of the ASG M14 is extremely solid and performs excellently out of the box.

The rifle comes with a great looking faux wood stock, and a full metal cocking handle, giving the Airsoft Rifle an authentic look and feel. The finish of the wood will fool even the most experienced player in thinking that it's real.

The receiver and every other part of the gun (except the stock) is metal.

The rear sight can be adjusted for improved accuracy and the butt plate can be opened to stabilize the Airsoft rifle on the shoulder.

The rifle support semi and fully automatic, with an easy to reach safety switch by the trigger.

The internals have been completely re-engineered and cleaned up, making it totally compatible with after market upgrade and replacement parts. Other M14s don't even come close to competing with the ASG M14 in the way off engineering, performance, and compatibility with parts.

The stock is large enough to house a large 8.4v battery so you can play all day without stopping to recharge. The gun comes with a small Tamiya connector, but replacing it with a large one is a matter of minutes.

The metal magazine that comes with it, is a High Capacity one that holds 400 rounds of 6mm plastic BBs. The model is compatible with almost every other M14 magazine in the market.

The M14 Rifle is an American Selective fire automatic rifle which developed to chamber 7.62x51mm NATO round in 1950s, based on the M1 Garand Rifle. It was the standard issue US rifle from 1959 to 1970 before replaced by thr M16 rifle. However, due to her high accuracy and better long range support in semi-auto mode, M14 has been modified and used by the US force again in batterfield and provided the basis for the M21 Sniper Rifle in 1975, and M25 Sniper Rifle, enhanced verion of the M21s and put in use from Gulf War (Operation Desert Storm) in 1991.