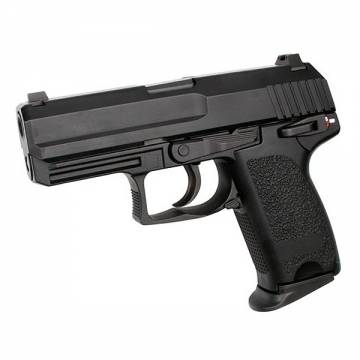 - White dots on the sights

- White dots on the sights

The USP Compact is the shortened version of the USP Pistol designed and constructed from H&K. The pistol bears the same operating procedures as its biggest brother, in a slight smaller package. The pistol is made out of metal and plastic. The whole upper part, slide, barrel, sight, etc are metal. The frame is made out of reinforced polymer, just like the real deal one. The model operates on gas and it offers a Blowback function that adds realism to it. To top it off, the sights bear white dots that help aiming in low light conditions. The frame offers a rail that it can only accept HK accessories, but with the correct rail adapter it can accept every Weaver compatible light or laser pointer.

On the left hand side of the gun is the slide-latch and safety / de-cocking lever. Put simply it means that you can cock the gun, press the de-cocking lever and the hammer drops forward without a shot being fired. The gun can now be fired easily by pulling the full stroke of the trigger until the gin shoots. From then on, it will operate with a short trigger pull. This set-up is ideal for safe carrying of the pistol and rapid firing after drawing without having to locate and actuate a safety-catch.

Ebvery internal component is reinforced and the USP Compact will last for years if treated the correct way. The magazine included with the gun comes with two butt-plates. The first is the one pictured (with a lip for your little finger to rest on top of) and the other one is smaller, fits flush with the gun's grip-base, and has no lip at the front. The recoil is average, but shot power is excellent. The model shoots 300 FPS out of the box. The bang from this gun is average, but this makes for much better gas consumption figures.

The USP (Universale Selbstladepistole or "universal self-loading pistol") is a semi-automatic pistol developed in Germany by Heckler & Koch GmbH (H&K) of Oberndorf am Neckar as a replacement for the P7 series of handguns. The pistol has been produced in various calibers like the 9mm, .357, .40 and .45 and in various lenghts and configurations.