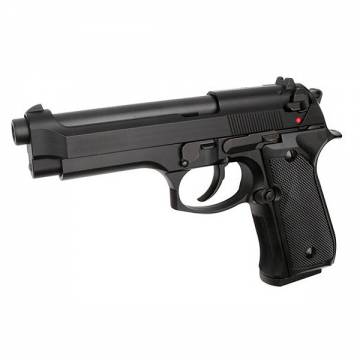 This M9 feels like the most realistic M9 ebery airsoft player will ever lay his/her hands on, and is so crisp it makes the next-best Gas Blowback Pistol feel dull and boring. The pistol is manufactured from a high-grade steel alloy, resulting in a full metal pistol that has a robust build and a lightning quick slide. Because the KWA are built to a higher standard than most other GBBs, the KWA looks and feels like it's on a whole 'nother level. To add to its realism, it has a functional safety/decocker, and breaks down just like the real thing. Accentuated white sighting dots are present to help with aim and to maximize accuracy.  The most amazing thing about this pistol, however, is the sheer speed at which it cycles.

Once you stop drooling over the way it looks and actually get down to shooting it, you’ll discover that the blow back delivers a serious kick and emits a much louder report than the older system. The KWA M9 is an updated version of the original KWA M9. The magazine has also been updated with a locking follower so you now no longer need a special tool to load it making it is possible to easily reload in the field. As you snap the P.T.P. out of your holster and double tap two rounds into a target you’ll find it nearly impossible to keep from grinning. The 315 FPS and adjustable Hop Up system makes sure of it.

The Beretta M9, officially the Pistol, Semiautomatic, 9mm, M9, is a 9?19mm Parabellum pistol adopted by the United States Armed Forces in 1985. It is essentially a military specification Beretta 92F, later known as the 92FS. The M9 won a competition in the 1980s to replace the M1911A1 as the primary sidearm of the U.S. military, beating many other contenders, and only narrowly defeating the SIG P226 for cost reasons. It officially entered service in 1990. Some other models have been adopted to a lesser extent, namely the M11 pistol, and other models remain in use in certain niches.